If you would like to be notified of upcoming events, please send a brief note with your email address to the current director, Professor Lisa Cooper (lhcooper@wisc.edu) 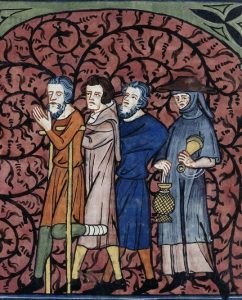 In the fourteenth century people of all social levels traveled significant distances for health care. Narrative sources reveal the ill searched for a better doctor at a time when university-trained medical practitioners were an exciting new alternative. Sufferers sought out distant saints when local options did not work, and numerous people traveled to specialists, saintly and secular, for specific health problems. In contrast to modern assumptions that people in medieval Europe rarely traveled, evidence shows that the sick were willing to travel very far from home in search of a remedy. 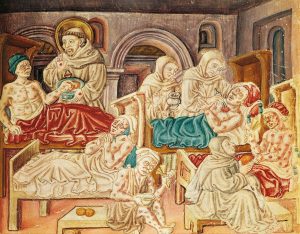 Before the development of independent hospitals in the later Middle Ages, some of the best medical care could be found in monastic infirmaries, where monks and nuns provided natural remedies and spiritual support for patients, the elderly, pilgrims, and orphans. The Abbey of Bury St. Edmunds in Suffolk, England, was one of the largest monasteries in medieval Europe, and was renowned for its medical care, but historians know little about actual healing practices there. In this lecture, Dr. Winston Black will discuss the recent discovery of a twelfth-century medical and religious handbook produced at Bury St Edmunds and use it to reconstruct the healing practiced there in a transitional period of medical history.

This talk argues that the York play’s depiction of the asynchrony of the act of legal witnessing—which always occurs in the present but speaks to past experience—provides a means of theorizing the complex temporality of the performance of the York Plays. In contrast to modern theater, individual Biblical episodes were performed repeatedly throughout the day on wagons at stations along a route that round through the streets of medieval York, so that a variety of episodes were performed at the same time. The “Last Judgment” draws on a theological model of time in which past and present interact to comment both on witnessing and on its own medium. The play’s disjunctions of temporality invite us to consider the ways that interactions between law and theatricality can potentially promote social change.

Sponsored by the Anonymous Fund and the department of English.

The prestigious and highly expensive purple dye known by various names such as Tyrian Purple and Imperial Purple was closely associated with the Roman and Byzantine emperors and others in the most exalted levels of Mediterranean society. This talk will investigate the possibility, as unlikely as it may seem, that shellfish purple dye was seen in Early Medieval England, on the very edge of the “civilized” world. How could the early English afford such southern luxury? In investigating the situation in England, it is necessary to step into the realms of zoology, archaeology, linguistics, early literature and chronicles, art history, and chemical research, since this subject is fascinatingly multidisciplinary.

This lecture is sponsored by the Department of Art History.

Sponsored by the Anonymous Fund and the departments of English and History.

Sponsored by the Anonymous Fund and the departments of English and History.