The prestigious and highly expensive purple dye known by various names, such as Tyrian Purple and Imperial Purple, was closely associated with the Roman and Byzantine emperors and others in the most exalted levels of Mediterranean society. This talk will investigate the possibility, as unlikely as it may seem, that shellfish purple dye was seen in Early medieval England, on the very edge of the “civilized world.”

How could the early English afford such southern luxury?

Come and find out on March 23rd! Organized by the Department of German, Nordic and Slavic.

Professor Lavezzo will discuss the introduction to her recent book, The Accommodated Jew: English Antisemitism from Bede to Milton (2016) as well as a short article about Stuart Hall, J.R.R. Tolkien, and racism in the recent past of medieval studies. To register and receive the reading for this event, please contact Lisa Cooper at lhcooper@wisc.edu.

The Middle Ages witnessed two monumental spatial phenomena, the rise of the city and the emergence of the doctrine of separate spheres. This talk considers the presence of a crucial way of understanding gender and urban space in a group of highly offensive texts: medieval English antisemitic literature. Focusing on one of the most widely told and influential medieval libels about Jews—the legend of the Jewish Boy—this presentation analyzes what happens when a racial and intolerant culture, oddly, imbues a woman with a public voice and public authority.

Professor Kathy Lavezzo (English, University of Iowa) is a well-established scholar in the field of medieval literary studies. Her wide-ranging work is especially engaged with issues of community, nationhood and social hierarchy; cultural geography and medieval cartography; Christian-Jewish relations; economy and trade; race and ethnicity; and gender and sexuality. Her most recent, groundbreaking book, The Accommodated Jew: English Antisemitism from Bede to Milton (Cornell, 2016) understands the mapping of Jews in English texts as richly responsive to the appearance of a secular and market-driven urban society in a Christian milieu. She is also the author of Angels on the Edge of the World: Geography, Literature, and English Community, 1000-1534(Cornell, 2006), and of multiple articles published in prominent venues (Studies in the Age of Chaucer, New Medieval Literatures, and PMLA, among others); she is the editor of Imagining a Medieval English Nation(2003) and Essays in Memory of Richard Helgerson (2011). With Lisa Lampert-Weissig, Professor Lavezzo is also the principal investigator for a digital humanities project, Remappings. Her scholarship has been supported by a Frankel Institute Fellowship at the University of Michigan and a Solmsen Fellowship at the Institute for Research in the Humanities here at UW-Madison.

Professor Lavezzo’s visit is made possible thanks to the generous support of the Anonymous Fund, the Program in Medieval Studies, and the Mosse/Weinstein Center for Jewish Studies at UW-Madison. 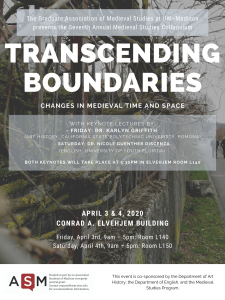 The theme for this year’s colloquium is “Transcending Boundaries: Changes in Medieval Time and Space,” and will feature paper sessions, lunch workshops, and keynote addresses on both days, ending in a closing reception. Our keynote speakers this year will be Nicole Guenther Discenza (English, University of South Florida) and Karlyn Griffith (Art History, California Polytechnic University, Pomona). We welcome abstract submissions from all fields on this subject, broadly defined, though all submissions will be considered. For the first time this year, we will have one session of undergraduate papers as well! Abstracts of 300-500 words should be submitted to gams@rso.wisc.edu, by January 31st, 2020. Please direct questions to GAMS President, Mya Frieze, at frieze@wisc.edu.

Time TBA: Presentation on Notre-Dame in Paris Before and After the Fire. 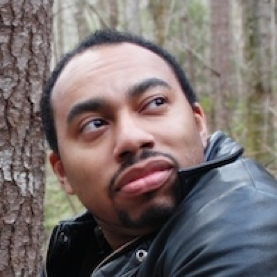 Cord Whitaker, Associate Professor of English at Wellesley College, and currently member of the School of Historical Studies at the Institute for Advanced Study in Princeton, will present a public, keynote lecture on “’The shade of trees their ancestors left’: Medieval Blackness, African American Medievalism, and the Resistance of the Far Right” on Thursday April 23 at 6:00 p.m. in the Department of Art History, Conrad A. Elvehjem Building, Room L140.

He will also conduct a workshop discussion on “Trippin’ into the Medieval Future: History, Controversy, and a Way Forward” (precise timing and place TBA).

Finally he will be present as commentator for our year-end symposium “Thinking Race in the Middle Ages and Beyond” on April 24, 2:00-5:00.

A scholar of Chaucer and late medieval English literature with a particular focus on race, Prof. Whitaker is author of Black Metaphors How Modern Racism Emerged from Medieval Race-Thinking (University of Pennsylvania Press, 2019).

The Medieval Studies Program invites faculty and graduate students to present current research related to the topic of our ongoing workshop series. We invite 20-minute papers focusing on aspects of race in the Middle Ages, in medieval studies and contemporary appropriations of the medieval past. Prof. Cord Whitaker of Wellesley College will be present to participate in discussion.
Please send a brief abstract to Thomas Dale, Director of Medieval Studies at medieval@letsci.wisc.edu by March 6, 2020.